Evidence showed that the important causes of maternal and perinatal mortality and morbidity have been due to P-E and fetal growth restriction (FGR). It has been shown that P-E is a multisystem disorder with unknown causes which contributed to pregnancy, and could affect the health of both mother and fetus. P-E is correlated to the uppermost maternal and fetal mortality and morbidity of pregnancy complications with the highest frequency of severe poor outcomes [4].

Newborns diagnosed with FGR would face higher risk for hypertension, cardiovascular diseases and diabetes later in their life [5]. Also, maternal complications include the HELLP syndrome, eclampsia, coagulopathy, cerebrovascular accident and death. Recent studies revealed that diagnostic ultrasound could be one of the great medical improvements to predict pregnancies’ outcome. Diagnostic ultrasound has been used to evaluate fetal wellbeing, and shown as important diagnostic modalities of prenatal care in both low and high risk pregnancies. Potential advantageous usage of ultrasound has been expanded in the clinical care of pregnancies’ research, and the results showed that this modality could be used to predict normal and abnormal fetal development [6, 7].

Defective trophoblastic invasion has been associated with subsequent development of P-E and fetal growth restriction (FGR). Trophoblastic invasion is detectable by uterine artery Doppler measurements, and precedes clinical manifestations. In the developing world, hypertensive disorders represent the second most common cause of maternal death as well as perinatal fetal mortality and morbidity [8-10]. The lack of diagnosing the above conditions, before the clinical onset of the disease has been of great concern. Hence, it prompted the researcher to investigate the use of uterine artery spectral Doppler analysis as a screening tool in order to predict P-E and FGR before the clinical onset of the disease.

Pre-eclampsia is a heterogeneous disorder with variable maternal and fetal manifestations. P-E occurs in about 3 % of pregnancies with a ranging of 7.5 % to 65 % recurrence risk [11, 12]. The direct assessment of trophoblastic invasion in human pregnancy is not possible, however the use of Doppler ultrasound permits the noninvasive evaluation of the utero-placental circulation [13, 14]. Due to the high risk P-E carries, it may be beneficial to ascertain the predictive value of uterine artery spectral Doppler analysis for P-E. Uterine artery Doppler waveform screening may enable the caregivers to identify and target patients at higher risk for close monitoring and intervention with prophylactic therapy.

The aim of the current study was to evaluate the sensitivity and specificity of uterine artery spectral Doppler screening at the first trimester of pregnancy to predict high risk pregnancies.

The present study was a prospective descriptive-analytic study that was carried out on pregnant patients coming for first trimester screening ultrasound (11week-13week + 6days) in a private center, Iran, in the time period of 2016-2017. First, the demographic data of all 164 pregnant individuals, who were enrolled in this study, including maternal age, gestational age, weight, blood pressure, number of previous pregnancies, history of abortion and history of P-E and HELLP syndrome, were recorded. All the participants were then examined by uterine artery Doppler ultrasound. Also, it should be noted that for eliminating the errors, all the individuals were examined by the same ultrasound device (Voluson 730 expert GE Company 2008, Curvilinear Multifrequency probe 3-7 MHZ) and the same experienced specialist (A.A). Trans-abdominal ultrasonography was used to evaluate the uterine artery in the first-trimester, and a sagittal view of the uterus was obtained, and the transducer Doppler probe moved slowly to another side of the uterus to identify the uterine artery. The Doppler signal was then sampled from the uterine arteries, when three consecutive wave sequences were obtained, and qualitative and quantitative indexes of the arteries were evaluated. The velocity of blood flow in the uterine artery in both left and right uterine arteries were investigated, and the average velocity was recorded. Resistance index (RI), pulsatility index (PI), and Peak Systolic Velocity (PSV) were calculated and recorded. Then, the pregnant individuals were followed to evaluate the outcomes as follows: 1. Early onset eclampsia 2. Early onset preeclampsia 3. Severe preeclampsia 4. HELLP syndrome 5. Preterm labor 6. IUGR

In order to investigate P-E, the delayed onset of P-E was evaluated at 34 weeks of gestation by measuring blood pressure, randomly or 24-hour urine test. Preterm labor was referred to as labor before the age of 37 weeks. Diagnosis of IUGR performed by a physician after 20 weeks, and adapted to the gestational age with uterine fundus, which was considered to be more than 3 weeks differed in IUGR. All results were recorded in the basic information form at each stage. Data were analyzed using SPSS version 22 software. ROC curve and Chi-square test were used, and also P value <0.05 was considered as the significant difference.

At the present study, 164 pregnant individuals were enrolled with the mean age of 29.68 ± 5.14, and with the mean gestational age of 88 days (12.5 weeks). Only one case of IUGR was observed, and due to this presence, IUGR did not have the enough power to analyze the sensitivity and specificity of diagnostic tests, and larger sample sizes were needed for evaluating this event. Also, three patients of Preterm labor (PTL) and six of GDM were needed. Due to the lack of enough sample sizes of PTL and GDM cases, the analysis of these complications did not have enough power to evaluate the sensitivity and specificity. In addition, 15 cases of HTN and 10 cases of P-E were observed in this study. Also, table1 and 2 show the descriptive statistics of all indexes used in this study.

Table  1:  The incidence of the complication

Table 2: Mean of each index was calculated during the time period of this study 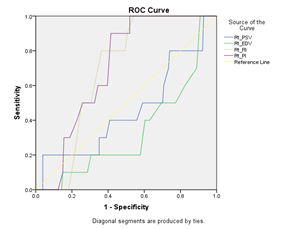 Fig. 1: ROC curve analysis of right side of RI and PI in predicting P-E 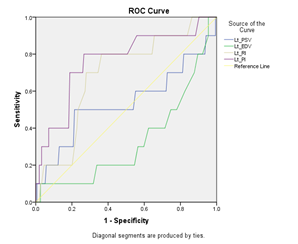 Fig. 2: ROC curve analysis of left side of RI and PI in predicting P-E

All above mentioned data were analyzed with the mean PI and RI, however, it was tried to evaluate the PI and RI by their lowest levels not their mean. By choosing the lowest level of RI and PI, more powerful results were observed. According to the results, RI and PI with their lowest level had a relatively good sensitivity and specificity for the diagnosis of P-E (table 3, AUC 0.758 and 0.801; respectively) (Fig 3). 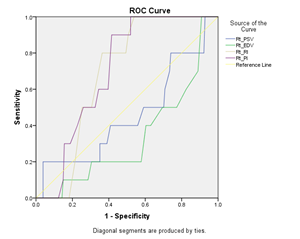 Table 3: Sensitivity and specificity of lowest RI and PI in predicting both HTN and P-E

Fig. 5: ROC curve analysis of both side mean of RI and PI in predicting P-E

Table 4: Sensitivity and specificity of RI and PI in predicting HTN

In this study, it was shown that using Doppler ultrasound at the first trimester is a powerful predicating factor of P-E in pregnant individuals. For example, the evaluation of both right and left RI of uterine artery in the first trimester showed that these indexes with sensitivity of 60% (right) and 60% (left) and specificity of 76 (right) and 72% (left) could use a valuable marker to predict the HTN later.

Pre-eclampsia (P-E) has been the most common pregnancy complications associated with serious maternal-fetal morbidity and mortality [15, 16]. Uterine artery Doppler waveforms can identify women with obstetric complications related to the abnormal placentation [17, 18], since Doppler ultrasonography has been a useful method to assess the velocity of uterine artery blood flow. An abnormal velocity waveform has been characterized by a high resistance to flow or an early diastolic notch [19, 20]. Early screening of P-E by uterine artery Doppler has been suggested based on the concept that the pathogenic mechanisms of P-E may be modified if prophylactic therapies were initiated early in pregnancy [21]. Abnormal uterine artery Doppler waveforms have also been able to identify the fetuses at the high risk of preterm labor and low birth weight [17]. Pregnancies were complicated by Fetal growth restriction (FGR) warrant close surveillance for maternal and fetal complications, and interventions in the anticipation of a preterm labor due to an apparent high risk for the development of P-E [22]. It has been hypothesized that the ability to predict those women at risk for P-E early in pregnancy might decrease the maternal and fetal morbidity through closer surveillance programs [16].

The purpose of this study was to assess the sensitivity of uterine artery Doppler screening in predicting P-E before the onset of the disease. The results of this study could be used to evaluate whether it was worthwhile implementing a routine screening program for pre-eclampsia.

Shear and colleagues [23] reported a relationship between P-E and FGR. Their study showed critical maternal complications more frequently in P-E patients with associated FGR. The current study assessed the sensitivity of PI and end diastole notching as a diagnostic tool to predict P-E and Fetal growth restriction. Three out of the seven patients who developed P-E, had abnormal Doppler waveforms which were evident from as early as the first trimester. The study therefore demonstrated that an abnormal uterine artery waveform with the early diastolic notching could predict 43% of cases that developed P-E as early as the 1st trimester. What is however significant was that uterine artery waveform analysis was able to predict P-E in the most severe cases in patients who presented early manifestations of the disease, and had the worst pregnancy outcomes. These values represented the 50th centile for each of the trimesters of pregnancy at 12 weeks, 22 weeks and 28 weeks of gestation, and were also used as cut off values by the Fetal Medicine Unit at Chris Hani Baragwaneth Hospital in Johannesburg.

Comparing the mean values in this study to the mean values in the study done by Gomez and colleagues (2008), a difference in the mean (50th centile) in the 1st trimester was noted. The 2nd and 3rd trimester mean values in this study were similar to the values obtained by Gomez et al. [24]. In both studies, it could be seen that the mean PI values decreased as the gestation increased as it was expected in a normal pregnancy. In this study, the 1st trimester PI values in patients who developed P-E was not a strong predictor of P-E. None of the values recorded were above the 95th centile when compared to the values by Gomez and co-workers (2008) [24]. However, in the clinical practice, the 1st trimester PI value of >1.5 was deemed as elevated and warranted the monitoring [3]. In the group that developed PE, the 1st trimester PI values ranged between 0.9 and 1.75; respectively. It is thus evident that only in the selected cases, an increased resistance to the flow was recorded in the 1st trimester. Comparing the mean PI values in the patients who developed P-E to the mean PI values developed by Gomez et al. [24], only one out of the seven recorded values was on the 50th centile in the 1st trimester, while 5 out of 7 second trimester values were above the 50th centile and 4 out of 7 Doppler PI 3rd trimester values obtained in this study were above the 50th centile. It can therefore be concluded that PI values did not perform as well as RI in this study. In case of P-E, it was shown that the mean of the both RI and PI had a relatively good sensitivity and specificity for the diagnosis of P-E. ROC curve analysis showed that RI of 0.79 had 70% and 75% sensitivity and specificity; respectively. Also, PI of 1.99 had 70% and 80% sensitivity and specificity; respectively. Also, the evaluation of HTN showed that RI had more power in comparison with PI, while both indexes could be used as a novel monitoring factor to predict the P-E and HTN as well. Also, it was shown that by choosing the lowest level of RI and PI, the analysis could achieve the highest sensitivity and specificity. Therefore, this study suggested to use the lowest RI and PI at both side to accurate the prediction. On the other hand this study suggested that RI could be more accurate index in comparison with PI in predicting of P-E and HTN.