ABSTRACT
Aim: With increase in use of cell phone and exposure to radiation emission from Wi-Fi,cell damage in all the body systems is found.It is necessary to find ways and means to prevent that cell damage that may affect normal functioning of the organs etc. The objective of this study was to assess the damage to brain caused by exposure to cell phones connected with Wi-Fi and prevention of that damage with Vitamin  E. Methods: Thirty male Wistar Albino rats were used in the study,rats were divided in different groups, they were exposed to cell phones and Wi-Fi for 8 weeks. The rats were treated with Vit. E 50 IU/kg of bodyweight for 4 weeks.Results: Histopathological examination of the rat brain revealed that, exposure of rats to cell phones and Wi-Fi caused significant damage to the neurons in different areas of rat brain .The rats treated with Vit. E showed less damage in comparison to untreated rat groups. Conclusion: In the brain of rats, treated with Vit. E intact neuronal architecture was found  along with less inflammation.

Brain is an organ that comprises a large mass of nerve tissues that are enclosed by skull. Major functions include sensory information processing, blood pressure regulation, breathing, and releasing hormones [1].

Brain damage is any harm that causes the destruction or impairment of brain cells. It occurs as a result of a wide range of internal and external factors. Brain damage can be defined as a significant, undiscriminating trauma-induced damage, while neurotoxicity typically is attributed to a selective, chemically-induced neuron damage [2].

Brain damage may occur via a wide range of conditions, illnesses, or injuries. Possible causes may include prolonged hypoxia (shortage of oxygen), poisoning, infection, neurological illnesses, and multiple traumatic injuries which can lead to chronic traumatic encephalopathy [3, 4]. And it has been investigated in various studies such as [5].

Oxidative stress is recognized as a main mediating process in the pathogenesis of cell damage and associated complications in different body systems, due to increased production of free radicals and abnormal antioxidant defense [6, 7]. It has also been found in previous studies that use of antioxidants (natural as well as synthetic ones) prevent cell damage in different organs due to diseases which enhance the oxidative stress or the direct insulting factors to the cells [8-10].

The brain damage caused by radiation depends on where the brain tumor is found, the quantity of radiation used, and the duration of the treatment. Radiosurgery can also lead to tissue damage that results in about 1 in 20 patients requiring a second operation to remove the damaged tissue [11, 12]. A study conducted by [13, 14], stated that there was no relationship between locations or regions of the brain exposed to radiations and brain tumor. It has also been concluded that there is a risk of acoustic neuroma as well as aglioma [15-17], and it increases with the increase in the cell phone use duration.

Nowadays, mobile or cell phone has become an important part of telecommunications in every individual’s life. In numerous countries, over half of the population use mobile phones. Although mobile phones are used by billions of individuals globally, a little increase within the incidence of adverse effects on health could have major public health implications on long term basis. Moreover, the number of cell phone calls every day, the length of each call and the amount of time people use phones are important factors which increase the health-related hazard [18].

Biological effects of electromagnetic radiation (EMR) emitted by a mobile phone have become a subject of an intense argument. A summary of the studies’ results was published lately by Kesari et al. [19] on which the authors conclude that the “regular and long term use of microwave devices, especially mobile phones can have a negative impact upon biological system, especially on brain, because the electromagnetic force source is held very close to the user’s head’’.

Vitamin E is a potent antioxidant soluble in lipids, preventing the propagation of free radicals and subsequent changes in membranes as well as plasmatic lipoproteins [20]. All forms of vitamin E have antioxidant activity [21]. The antioxidant effects of Vitamin E, which suppresses the free radical production and assists the neuroprotective effect have been reported by several studies [22-25].

Thirty Male Wistar Albino rats were obtained from the animal unit in faculty of Pharmacy, Northern Border University and used in the study, each weighing 240-260 g and 8 weeks old at the beginning of the experiment. They were housed in polycarbonate cages. They were kept in an environment of controlled temperature (25-26 <C), humidity (55-60%), and controlled light and dark period for 5 days before the start of the experiment. A standard balanced diet and tap water were provided.

The rats were randomized based on body weight into 5 groups prior to the administration as follows:

All the animals were observed twice a day for signs of morbidity and mortality during the experimental period. Mobile phones were given calls after every 2 hours for 2 minutes.

After removing the brain from skull, brain was sectioned sagittally. Right hemispheres were removed and fixed with a buffered 10% formalin solution for 24 h and embedded in paraffin. Tissues were then sectioned, stained with hematoxylin and eosin (H&E) and examined for histopathological changes using light microscope. 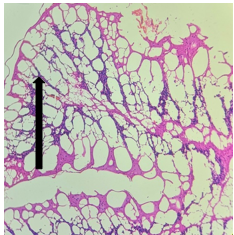 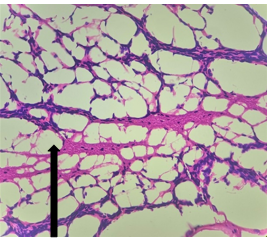 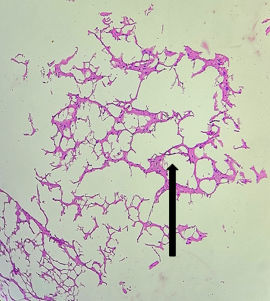 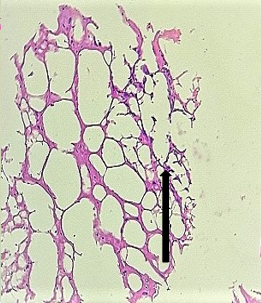 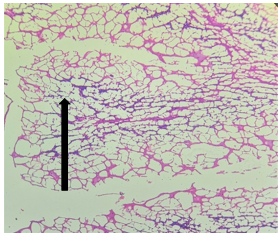 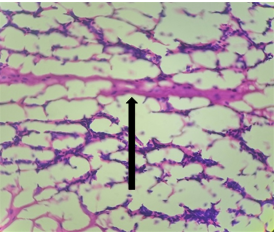 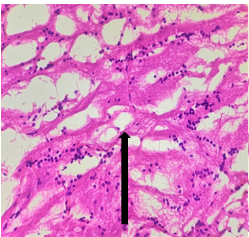 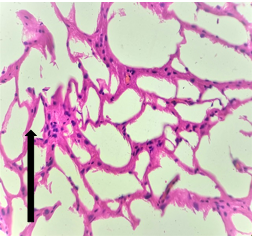 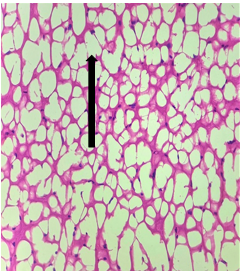 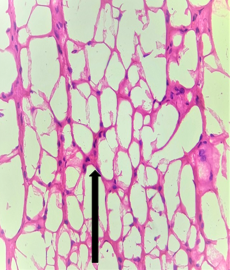 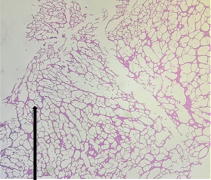 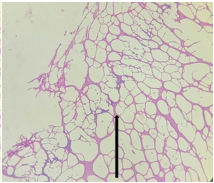 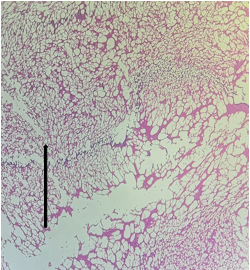 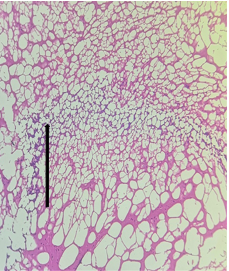 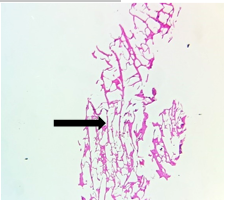 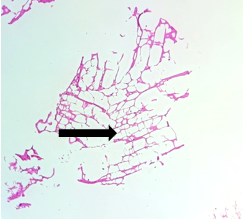 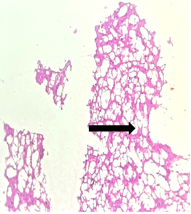 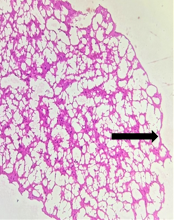 The use of mobile phones is currently one of themost growing technological developments. The effect of radiation transmitted from mobile phones and other wireless electronic devices on human health is a subject of interest and study around the world, as a result of the enormous increase in mobile phone usage throughout the world [26]. The closeproximity of the antenna of a phone to theabdominal organs has increased the concerns about the biological interactions between electromagnetic radiation and body organs [27].

Although WHO stated that “A large number of studies have been performed over the last two decades to assess whether mobile phones pose a potential health risk”, To date, no evidence of adverse effects on health have been established as being caused by mobile phone use [28].

Hardel et al., and Lonn et al. [29, 30], concluded that exposure to mobile phone radiation depending on duration time  of mobile phone use, will result in increased possibility of incidence of brain tumors and acoustic neurinoma.

From the histopathological results of our study, it is evident that exposure to cell phones and Wi-Fi, produces significant inflammatory process in the different areas of brain and these findings are similar to the studies conducted by [31, 32]. Although the duration of the study was not very long, the damaging effects were observed. Continuous exposure may lead to prolonged inflammation in the brain leading to the cerebral edema, loss or impairment into the function of the organs and systems which are being controlled by the area in which damage occurs and increased risk of cancer due to repeated mutations in the area [33-35]. In this research, it was observed that standard antioxidant Vit E ,when used simultaneously with exposure to Wi-Fi and mobile phone, prevented the damage to brain cells and decreased inflammation was seen. These findings in the present study are consistent with the findings of [36] which concluded that vitamin E seems to be a highly promising agents for protecting endometrium tissue from oxidative damage and improving histopathologic changes caused by 900MHz EMR exposure which may alter the antioxidant capacity and catalase in rat brain [37]. The decrease in inflammation and damage to the nervous tissue can be attributed to a decrease in oxidative stress by Vitamin E which enhances nerve tissues protection by the removal of the free radicals and stabilization the cell membranes [38, 39].

It can be concluded that use of mobile phones and Wi-Fi cause inflammation and brain damage partly by increasing the free radical formation and partly by direct damage to the cells.

The authors declares that there are no conflict of interest.

The authors wishe to acknowledge the approval and the support of this research study by the grant No (7725-PHM-2018-39-F) from the Deanship of  Scientific Research in Northern Border University (N.B.U.), Arar, KSA.