Cholesterol is a white, waxy, fatty substance, that normally happens in the liver, can be gotten from nourishment and is discharged into the circulation system through a protein called lipoprotein. High-density lipoprotein (HDL) called good cholesterol (carrying the extra cholesterol out of arteries) and low-density lipoprotein (LDL) called bad cholesterol (doing heart attack or stroke, kidney and circulation problems) are the two sorts of cholesterol [1]. It is a vital substance of great importance in maintaining the physiological processes of the body. Whereas, cholesterol levels are significantly affected by the quality of food [2], so it is fundamental to activate the role of nutrients that are derived from a healthy diet as important factors in preventing diseases [1].

The result of the statistical analysis that is stipulated in Table (1) and shown in Figure (1) shows that animals that received 500mg/kg b.w cholesterol (G2) had a significant increase in the mean relative body weight gain (78.51 ± 6.61%) compared with the negative control (G1; 48.30 ± 7,04%). The results of [3] were consistent with our results, where it is observed that there was an increase in the bodyweight of rats that had a high-cholesterol diet. Whereas [4] explained the increase in body weights of the high-cholesterol group with high deposition of subcutaneous fats in the abdominal cavity. However, there was a significant decrease in the mean relative body weight (59.54 ± 12.40%) of G3 compared to G2 (78.51 ± 6.61%). This result was consistent with what was mentioned in [5], which indicated a decrease in body weights of obese rats after being diluted with apple cider vinegar. Moreover, [6] observed a decrease in visceral fat in patients of hyperlipidemia as well as the patients diagnosed with diabetes, after supplying their diet with apple cider vinegar. Furthermore, in the rats of G4, the value of the mean relative body weight gain at the end of the experiment period reached 63.02 ± 12.77%, and there was a significant decrease in body weights compared to the values of G2 (78.51 ± 6.61%).

Moreover, the mean relative bodyweight of the group that had cholesterol diluted with white vinegar significantly decreased (39.97 ± 7.22%) compared to the negative control group (48.30 ± 7.04%). [7] attributed the ability of vinegar to reduce total body weight in rats that were fed high-fat meals. This means that the acetic acid which is considered an active ingredient in all types of vinegar, activates some enzymes responsible for the oxidation of fatty acids in the liver, which obstructs fat accumulation in the tissues that results in bodyweight decrease.

The findings by [8], [9], and [10] that were conducted on a sample of obese humans who underwent experimental doses of pomegranate vinegar showed a decrease in the amount of visceral fat estimated using a CT scan technique. In addition, an increase in the activity of AMPK (5-AMP-activated protein kinase) was observed in adipose tissue biopsies in the group that had a diluted pomegranate vinegar. The AMPK enzyme is a major fuel gauge of metabolism that restores energy homeostasis by switching on catabolic pathways while switching off cell growth and proliferation by controlling the activity of some factors that organize lipid synthesis and oxidation [7, 11]. Moreover, the study of [12] stated that acetic acid increases lipolysis by increasing the activity of the lipolytic genes involved in it.

[13] revealed that acetic acid can affect total body weight and the accumulation of visceral fat through several mechanisms suggested by research conducted in this regard. However, the study of [14] explained the potentiality of acetic acid to lose bodyweight as it reduces the activity of disaccharidase enzymes that break down complex sugars. Furthermore, [15] stated that acetic acid increases energy consumption by increasing the activity of the peroxisome proliferator-activated receptor which is responsible for the oxidation of fatty acids and energy production. While the study of [16] indicated that vinegar enhances the feeling of fullness for a sample of healthy people.

Table 1: The mean percentage of body weight gain in the control group with cholesterol (500mg/kg), and two groups treated with cholesterol diluted with Apple Cider Vinegar and white vinegar. 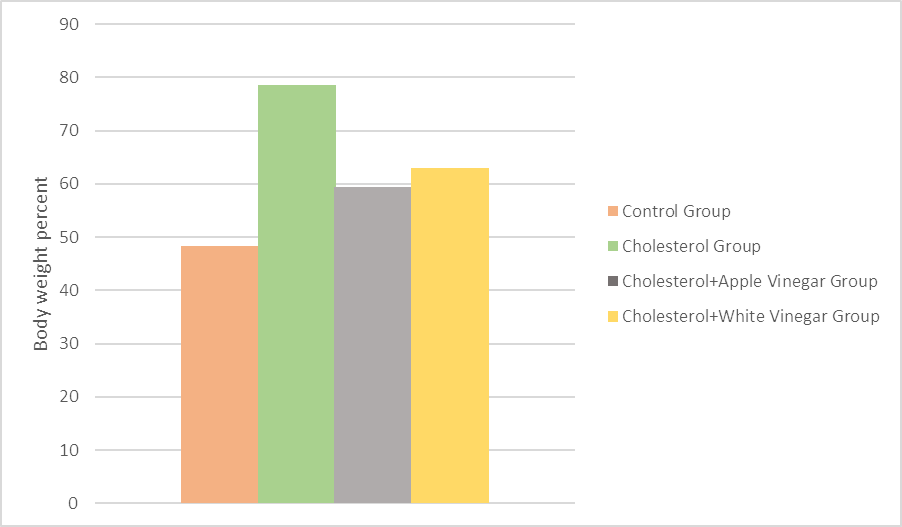 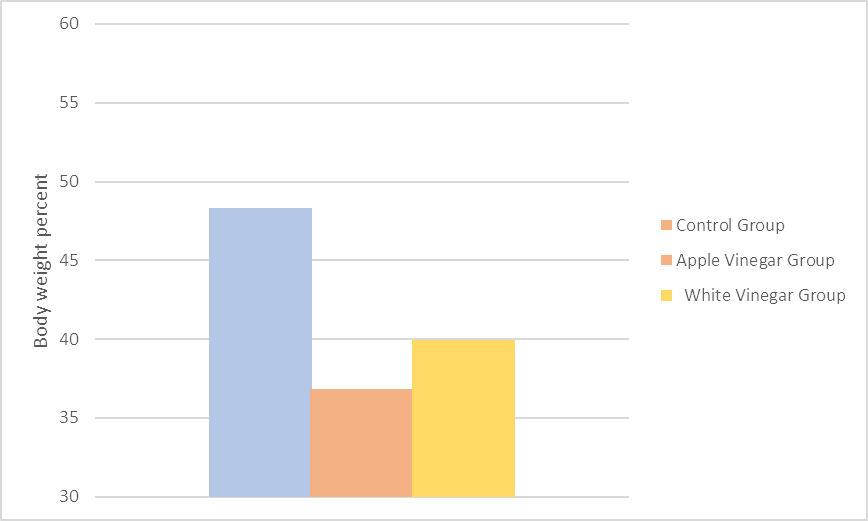 The results that are depicted in Table (3) and Figure (3) show a significant increase in total cholesterol levels in G2 that had cholesterol doses in coconut oil. It reached 135.50 ± 9.51 mg/dl, compared to the negative control group (G1) which reached 56.14 ± 14.92 mg/dL at the end of the experiment (8 weeks). The current finding was consistent with the findings of [17] and [18] which indicated that the mixture of cholesterol with coconut oil increases the total cholesterol in the blood in the rats that underwent the experiment. In addition, the study by [19] demonstrated that coconut oil contains approximately 92% of saturated fats as soon as being mixed with cholesterol, and it significantly contributes to raising the total cholesterol in the blood and the deposition of free cholesterol and cholesteryl esters in cells and tissues. 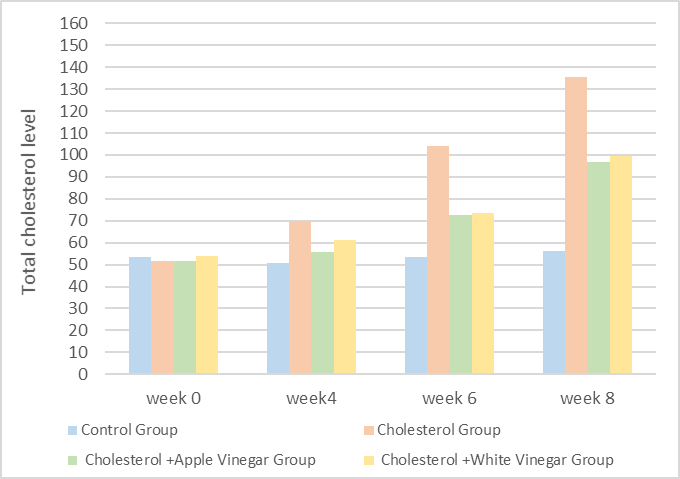 The first group (G1): The kidney appeared to be divided into a dark outer layer which is the cortex and another faded innermost layer which is the medulla. the medulla is split up into several sections, known as the renal pyramids, each of which has a pin top surrounded by a small cup and the small cups combined to form two or three large cups that open in turn the renal pelvis which is funnel-like dilated part of the ureter in the kidney. The sector shows the urine tufts with round structures which are known as renal glomeruli enclosed by Bowman's space (or "urinary space", or "capsular space") and contain Proximal convoluted tubule (PCT) and Distal convoluted tubule (DCT) as shown in Figure (4).

The second group (G2): It showed structural changes in tissue that included most of the basic components in the renal tissue, where it appears spots of tissue degradation and hemorrhagic in the interstitial tissue as well as decomposed renal glomeruli, while Proximal convoluted tubule (PCT) were distorted including atrophic and enlarged, as the process of Hydrolysis represented in various PCT and DCT, and it was accompanied by the presence of clear fibrosis areas. Accordingly, the tubules were found in a deformed state in addition to the focal decomposition of some urinary tubules as in Figures (5-8).

[21] observed a clear accumulation of fat in liver cells in HFD-fed rats compared to rats of the control group. It was also found that high cholesterol causes oxidative stress and damage to kidney cells, an increase in the size of Bowman's area, and atrophy of the glomeruli, as shown in Figures (5-8).

The third and fourth groups (G3 & G4): The study of the sectors showed improvement in terms of the recovery of Renal glomeruli and Proximal convoluted tubule (PCT) and Distal convoluted tubule (DCT), with some changes remaining in the renal tissue such as the deformation that is represented in the atrophy in some of the renal glomeruli and also the decomposition of DCT & PCT with interstitial hemorrhage. Apple cider vinegar can fight damaging free radicals because it contains antioxidant properties called polyphenols [8, 22]. In addition, [23] explained that apple cider vinegar improves the immune system against oxidation with a high-fat diet by increasing the activity of antioxidant compounds such as vitamin E. It was observed in the study of [24] the improvement of tissue after being diluted with apple cider vinegar for rats that were injected with nicotine, which caused changes in fats. Moreover, apple cider vinegar contains pectin fibers, a type of soluble dietary fiber. [25] and [26] reported that pectin fibers affect the distribution of cholesterol in body tissues along with the diversity of the types of vinegar, which includes white vinegar with a low content of polyphenols. Meanwhile, the previous studies indicated that white vinegar has similar effects as other types of vinegar [27]. This can be attributed to the conclusion of some research that the lipid-lowering effect is due to the presence of acetic acid, which is the active component in vinegar [28, 29] (Figures 9-10). 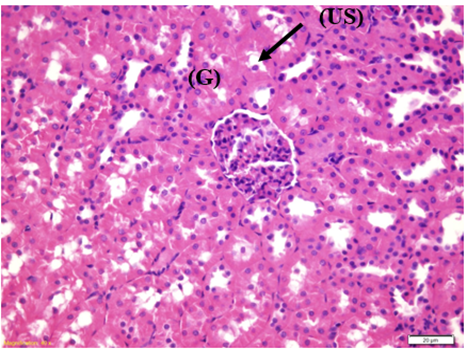 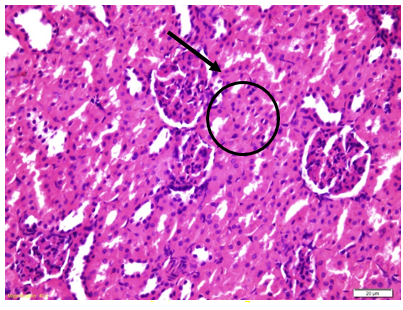 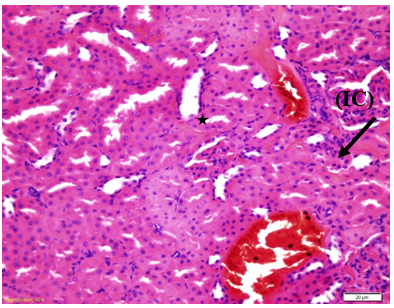 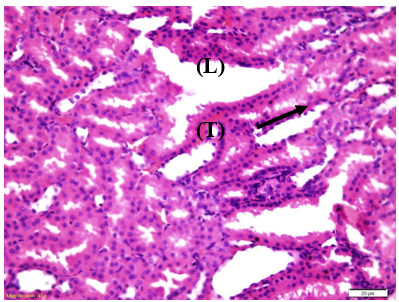 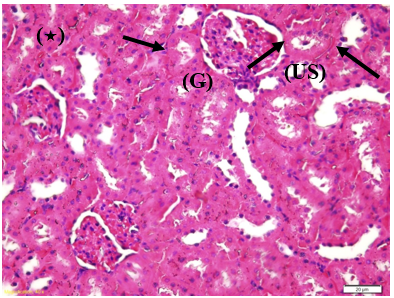 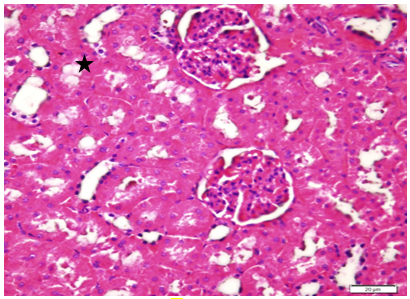 Adult male albino rats of Wister strain weighing 180-250g were used in the present study. The animals were obtained from the Animal House at King Fahad Medical Research Centre, King Abdulaziz University in Jeddah. The animals were kept at room temperature and exposed to natural daily light-dark cycles. Rats were fed a balanced diet, and clean water ad libitum. The experiment period lasts for 8 weeks. Cholesterol was purchased from Techno-gene company, Egypt in the form of a white crystal substance. In addition, coconut oil was purchased from a local market. The cholesterol was dissolved in coconut oil. After that, the daily dose for each rat was prepared by diluting 500 mg/kg b.w of cholesterol in 0.5 ml of coconut oil. The Apple cider vinegar and white vinegar were purchased from a local market, produced by the Orient Garden Company. The apple cider vinegar and white vinegar were diluted (15%) in distilled water. The rats were administrated a dose of 1 ml (15% diluted vinegar), 3 hours after they had the cholesterol [30].

The histological study was carried out using the method of [31]. The control and treated animals were sacrificed after being fasted. Kidneys from various groups were removed and fixed by inundation in formaldehyde solution (10%). Haematoxylin and eosin stain (H & E) were utilized to study the general histological structure of the kidney.

Statistical data analysis was conducted by IBM SPSS statistics, version 20, program to calculate Standard Deviation (SD), and the differences between means. In addition, the One Way ANOVA test was used, and the difference was considered significant at p <0.05 [32].