Background: Renal stone is a very common problem in human being, but it prevails in the hot regions more than other areas. The high existence and prevalence of kidney diseases in Saudi Arabia can be acknowledged as a result of certain abnormal food in the Gulf and Middle East regions with a decrease in calcium and high animal protein intake such as (chicken, meat and fish). Many studies explained that kidney problem is existed in Saudi Arabia and other Gulf countries more than European countries due to environmental factors. There is a great necessity to assess the intensity of public knowledge in a particular population, to make successful strategies and put into practice the management and anticipation of kidney diseases. Aims: The aim of this study is to investigate the level of awareness of the Saudi people about renal stones and to compare the level of awareness and different demographic factors. Materials and Methods: In this cross-sectional study, 420 participants were randomly enrolled from whom 46.2% were male and 53.8% were female. A pre-tested questionnaire was used for data collection. SPSS software was used to analyze the collected data. The relationship between socio-demographic factors of the participants and their level of awareness was calculated using Chi-square test. Results: The findings of the study indicated that the public in Saudi Arabia had a sufficient level of awareness, 88.3% of whom were recognized with a good level of Awareness. There was no significant difference between the level of education (P=0.495), residence (P=0.883), and occupation (P=0.370) in relation to the level of awareness. A significant difference was observed in awareness based on the gender of participants. Females showed significantly higher awareness compared to males (P=0.001). Additionally, married participants had a significantly higher awareness level compared to people with other marital statuses (P=0.009). Finally, there was a significant relationship between age and level of awareness (P=0.000). Our results showed that the level of knowledge improves with age increase. Conclusion: The level of awareness about renal stones was sufficient among general population in Saudi Arabia. There was a significant relationship among gender, age, marital status, and the level of awareness.

The diseases related to kidney have become universal health problem [1-4]. There are numerous reports explaining that dangerous kidney diseases, mainly kidney failure prevail due to the particular medical and socio-demographical aspects [5]. Renal diseases are increasing very frequently due to hypertension, diabetes, obesity and cardiovascular diseases [6]. This problem is increasing day by day and now it exists in about 10 to 15 percent of people globally [7].

In Saudi Arabia, the problem of the kidney stones is prevailing more than western countries. Many people in this country have to face kidney disorder especially kidney stones [8].

Renal stone is a very common problem in human being, but it prevails in the hot regions more than other areas. The high existence and prevalence of kidney diseases in Saudi Arabia can be acknowledged as the result of certain abnormal food in the Gulf and Middle East regions with a decrease in calcium and high animal protein intake such as (chicken, meat & fish). There is hot season in these regions and the water intake is very low. Therefore, the less volume of urine, hotness in the environment and less intake of calcium increases the danger of the formation of the renal stones. [9]. This difficulty is growing in the Saudi Arabia, due to the slight knowledge about the symptoms, grounds and management of kidney stones.

In the last two decades, infection in the kidney was considered as the most important cause of renal disease, but presently, it has turned into a less expected cause of chronic kidney diseases, mainly in the western countries [10]. Many consequential reports specify that hypertension and diabetes are the most common causes of the kidney diseases, globally [11].

It is true that if the kidney diseases are diagnosed in the earlier stages, it can decrease the possibility of the kidney failure by on time prevention and medical treatment; but it is only possible through the awareness about this disease [12]. Therefore, the public awareness plays an important role in controlling kidney problems, even the kidney failure.

In the past there was no specific treatment, but with the passage of time and during about last two decades, the urinary stone treatment was spectacularly transformed. Nowadays, the gigantic bulk of stone is reduced impulsively with conventional management, whereas, the remaining stone can be destroyed or discharged efficiently with smallest surgical involvements such as endourological techniques and shock wave lithotripsy (SWL). However, it is also true that a chief dilemma is the high reappearance rate even after surgery or shock wave lithotripsy.

There are many studies indicating that kidney problems exist in Saudi Arabia and other Gulf countries more than European countries due to the environmental factors. A recent inclusive survey has been performed to expose the occurrence of kidney diseases. This study explained that 9.4% of the population of the Saudi Arabia is suffering from kidney diseases [13]. Therefore, the performance of self-awareness is important to curb the kidney disease and its associated risk issue [14]. There is a great necessity to assess the intensity of public knowledge in a particular population, to make successful strategies and put into practice for management and anticipation of kidney diseases.

Executing the novel technique to increase awareness of the community about the early kidney stone can play an important role to reduce the number of cases. There are a few studies on renal stone and its causes, symptoms, screening, and management in Al-Riyadh city in Saudi Arabia.

Ahmad et al. [15] explained the awareness of the people about renal stones in Saudi Arabia. This study has explored symptoms, causes and management of renal stones. This study is based on quantitative analysis and selected the cross sectional data of 407 participants from two different areas (Al-Riyadh & Al-Hassa) of the Saudi Arabia. This study collected data from October to November in the year 2017. This study applied statistical tests to find out the results, and concluded that this problem is increasing in Saudi Arabia, but there is very little awareness about the symptoms, causes, and management of renal stones. This study further explained that this problem prevails due to fewer intakes of water and overweight.

Ahmand M. A. [16] investigated the problem of prevalence and awareness of the urinary stones in the KSA. The aim of this study was to explore the composition of the stones and prevalence of urinary stones in the different age groups. This study collected 384 stones from 347 patients. These samples were submitted to Jhons Hopkins Aramco health care from 2011 to 2013 and descriptive statistical test was applied to find out the results. This study found that renal stones were a very common problem in both genders, but the existence of stones in females was more than males. The mentioned study also explained that there are different factors other than climate conditions that can affect renal function in Saudi Arabia. These factors are water hardness, age, occupations, eating habits and body weight. This study concluded that there is no difference between renal stones and those of urinary bladder. The stones made of calcium are common in KSA. Causes of these stones are hot season and eating habits.

Saleh Hadi Alharbi et al. [17] investigated awareness and effective management of Saudi population about kidney diseases. This study collected the cross-sectional data by a survey and randomly selected the sample of 950 healthy Saudi people. The age of these participants was 18 to 65. For analysis of this study statistical techniques were applied, and it was found that renal problem is increasing very frequently among people of all age groups, and most volunteers do not even have basic knowledge about renal diseases. There are many causes for the prevalence of renal problems such as obesity, hypertension, and lack of self-awareness. This study concluded that it is necessary to provide awareness to people to curb this situation.

Saeed et al. [18] explained that kidney stones have become a very common disease among Saudi population. There are many causes for renal stones formation. The aim of this study was to find out the causes, symptoms and the knowledge about kidney stones. This study selected Albaha city for the research.  This study collected the data through a questionnaire. The sample size of this study consisted of 417 volunteers. This study found that a large number of people do not have awareness about renal stones, and do not know how to manage this disease. The mentioned study concluded that sufficient knowledge should be provided to the people. People can be aware about this disease through educational institutions, internet or by organizing seminars.

Khan et al. [19] tried to provide information about the composition of kidney stones biochemically. This study also elaborated the risk factors that increase the existence of kidney stones in the human body. For the analysis, this study collected 307 kidney stones from different patients. The duration of this analysis was about 1 year (from 2000 to 2001). These stones were sent to Riyadh lab for the analysis of their compositions. It was found out that the people of Riyadh are not aware of the cause and symptoms of the kidney stones. There are many factors such as dieting habits, environment, and psychical health can contribute to develop the stones in renal ducts. This study also found that calcium stones are common in Saudi people. Summer season is very effective to develop the stones. It is necessary to educate people about renal stones and their causes. This awareness can curb the increasing rate of renal stones.

This study is a cross-sectional one that was carried out among adult population in Saudi Arabia with regard to awareness of renal stones.

This study was conducted in Saudi Arabia in 2020.

The study population was adults who lived in Saudi Arabia, and agreed to fill out the questionnaire.

A Total of 382 was participated in the study.

A pre-tested questionnaire was used in data collection. The questionnaire includes questions about socio-demographic factors and awareness of renal stones among adult population in Saudi Arabia.

Data was coded, entered, and analyzed using the Statistical Package for Social Science (SPSS) version 23. The level of awareness of adult population in Saudi Arabia regarding renal stones was assessed using a scoring system. A score of 1 was given to correct responses, and 0 was used for incorrect/do not know responses. Participants were categorized into two groups; scores less than 6 out of 12 were considered as poor level of awareness, while scores equal or greater than 6 were considered as good level of awareness. Furthermore, the relationship between socio-demographic factors of participants and their level of awareness was calculated using Chi-square test. A statistical significance was determined at p = 0.05.

The ethical approval was obtained from the ethical committee of the Basic Health Research Centre in King Fahad Medical City (KFMC).

Our data revealed that participants who had previous information about renal stones comprised (96.2%), their main source of information is family and friends that represented (63.3%), followed by social media (35.2%) and health care professionals (14.8%) (As shown in Figure 1). Lower percentage of the participants had a previous experience of renal stones (13.1%) while (86.9%) did not have. 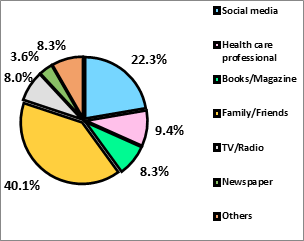 * Participants can choose more than one source (total of % ≠ 100) 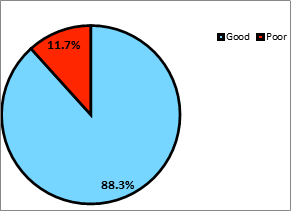 Figure 2: Level of Awareness of Public about Renal Stones

Table 2: The Relationship between Socio-demographic Characteristics of Participants and Their Level of Awareness

This study involved random selection of 420 Saudi people to assess their awareness about renal stones, and to analyze if there was a significant relationship between demographic data of the participants and their level of awareness.

When the study participants asked about the best way to diagnose renal stones, radiology imaging was the most chosen and the best diagnostic method of renal stones (54.8%), which is similar to the findings of study that was conducted by Almuhanna et al. (2018) [21].