Background: Sleep is an essential physiological function in which both the body and the mind rest. However, lack of sleep and deprivation can greatly affect many aspects of our lives including social, academic, psychological, and even physiological factors. Medical students often tend to have long studying hours and less sleep throughout their college time. We aim to study the effect of sleeplessness and deprivation among them. Methods: This is a cross-sectional study that was performed during the 2017-2018 academic year at the College of Medicine of King Saud University in Riyadh, Saudi Arabia. We included a stratified random sampling technique where 430 healthy medical students from five academic years (first, second, third, fourth, and fifth years) of both genders were recruited to fill a self-administered questionnaire to assess sleep disorders. The questionnaire included questions exploring the impact on social life and academic performance by grade point average (GPA) 5/5. Data were analyzed using IBM SPSS V 21.0 software. Results: Out of 430 participants, main causes of sleep deprivation were stress 296 (19.6%), college assignments 310 (20.6%), internet 257 (17.0%), anxiety 157 (10.4%), work 107 (7.1%), socializing with friends 99 (6.6%), depression 78 (5.2%), family commitments 70 (4.6%), video games 55 (3.6%), sleep disorder 41 (2.7%), partying 17 (1.1%), loud disruptive housemates 12 (0.8%) and young children 9 (0.6%). Meanwhile, gender (P < 0.01), academic performance (P < 0.01) and academic level (P = 0.005) had significant association with sleep deprivation. Conclusion: The results showed that the medical students at King Saud University are suffering from sleep deprivation and the main reason for their sleep deprivation is the academic burden. Therefore, sleep deprivation impacts their academic performance.

Sleep is a natural physiological and complex process in which the body and mind rest with one-third of the humans’ life cycle [1]. Sleep can be measured in a simple way of decreased relative movement activity and by rest, while a more complicated way is to measure sleep by measuring the electrical brain signals obtained in the electroencephalogram (EEG) [2]. Overall, sleep is very important for the basic functionality of human beings such as learning, making decisions, consolidating memories, and analytical thinking [3, 4]. The ideal sleeping hours which is needed to retain a normal stable healthy life is between 7 to 7.9 hours per day [5, 6].

Sleep habits are affected by many factors including the internet and social networks. They are considered as the leading causes of delayed sleep patterns. Other causes of staying up at night are using central nervous system stimulants such as caffeinated food and drinks, cigarettes, and even protein-rich meals which often can lead to insomnia [7, 8]. Moreover, some medical conditions can also disrupt sleep patterns and cause further problems such as obstructive sleep apnea, chronic sleep deprivation, narcolepsy, cataplexy, depression, and anxiety [8, 9]. Medical students are exposed to sleeping disorders much more than any other student [10].

Sleep deprivation is a worldwide common issue among university students with the burden of academic work and social pursuits, caffeine intake, stimulants, drugs, and social media. As a result, many students, especially medical pupils are at an increased risk of sleep deprivation and disturbances when they often experience insufficient sleep time and quality [9]. However, sleep disturbances and sleep tardiness among medical students are greatly variable based on year, examinations, country, university system. Around exam times, sleep disturbances can be varied as low as 19% up to even 90% [10].

Sleep deprivation can have a great effect on mood, alertness, cognitive functions, and motor activity. These factors represent the vital features in the life of a medical student as they are one of the top university students with longer hours of study and homework [11]. The amount of working time for a medical student and house medical staff can reach to long hours per day. Thus, the anxiety cycle and thoughts about the severe effects of lack of sleep in student training, medical errors, and patient safety increase [12].

This is a cross-sectional study that was performed during the 2017-2018 academic year at the College of Medicine at King Saud University in Riyadh, Saudi Arabia. A total of 430 medical students were included using a stratified random sampling technique. Regarding inclusion criteria, first, second, third, fourth, and fifth-year students of both genders were enrolled. Meanwhile, students with any medical condition were excluded. The sample size calculated by using the formula n=Z2α P(1-P)/d2, where: P is the proportion with 36.6% expected reported rate of a medical student who has sleep deprivation according to Abdulghani HM et al. [13] with Z=1.96 for 95% confidence level, d=precision 5% (n=357) + (20% of the sample size to cover non-response). Furthermore, we divided the students equally into ten strata, depending on the gender and the academic year (female: first, second, third, fourth, fifth year) and (male: first, second, third, fourth, fifth year) in each stratum they were 43  students. The questionnaire is a self-administrated questionnaire that was distributed to assess gender, academic year, sleep/wake schedule, sleep habits, and sleep hours. Their Perceptions about the impact of sleep deprivation on their academic performance,  physical and mental health were reported by recording their performance (GPA 5/5). Data were analyzed using IBM SPSS version 21.0 software. Descriptive statistics including frequencies, percentages, the mean, and standard deviation were used to describe the categorical and quantitative variables. Appropriate statistical tests were used to perform the univariate analysis. Lastly, a p-value of ≤ 0.05 and 95% confidence intervals were used to report the statistical significance and precision of results.

It has been revealed that sleep quality has an impact on medical students’ physical and mental health, and subsequently their working capacity [14]. This could affect the community as medical errors and accidents would be more frequent due to the decrease in their working capacity. Moreover, attention, memory, learning process deficits, and alterations in cognitive functions are all associated with sleep depreciation [15, 16]. This can go along with our finding where students found their academic performance low as well as difficulty in concentrating in classes the following day. It also has been found that when sleep deprivation is cumulative, it can lead to negative consequences for a person's health and efficiency, besides the risk of accidents increase [17]. In general, the academic performance is affected or decreased by the time of waking up, the later the student wakes up the lower their academic performance get [18, 19]. A study on 512 medical students in 2019 reported that a low GPA was significantly lower than that of good sleepers which go along with our findings [20]. Maheshwari et al. also stated that the higher proportion of medical students had a total sleep duration of fewer than 5-7 hours similar to our finding where most of the students (236 (54.9%)) reported sleeping between 4-6 hours.

Other studied factors including eating habits, exercise, mood states, perceived stress, socializing, spiritual meditation, time management, religious habits, working hours during the week, gender, and age showed a strong correlation and effect on sleeping habits [21]. Lastly, a cross-sectional study that was performed in Hong Kong on 1629 adolescent found that students who had earlier bedtime and longer sleep time during weekdays with no delay in bedtimes as well as waking up early at the weekends had an excellent academic performance compared to those who had poor grades [21].

LThe limitation of our study is different in the subjective understanding of the personal need for sleep from one student to another. In addition, students might have an exaggeration response when it comes to emotional and personal matters such as GPA and sleep.

Sleep deprivations have a wide effect on many social, academic, and psychological aspects of medical students. In addition,, it can have a great effect on their performance, confidence, and social interactions. Further studies are needed to compare different universities as some universities might have more workload and assignments than others.

Table 3. The relationship between Gender, year of study, and GPA with sleep-deprived students or not.(n= 430)

Table 4.  The association between sleep experiences and sleep-deprived students or not. (n= 430)

Table 5. The relationship between Overall mean experience profile of some issues, after a night of very little sleep considering some variables. (n= 430) 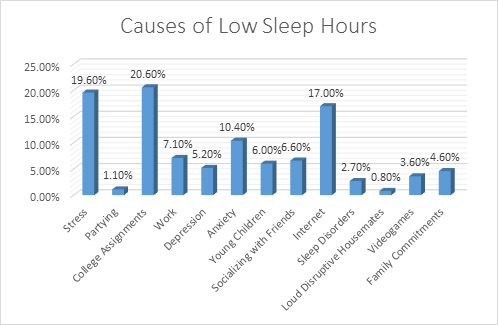