Background: Metformin is prescribed worldwide, and treatment periods have increased, so, the prevalence of metformin-induced manifestations may have also significantly increased. Objective: The main study objective was to assess the self-reported side effects of the prescribed metformin in diabetic patients, to show the metformin complications and to show other uses of Metformin among the study participants. Methods: This cross-sectional study was conducted on a selected section of people in the Mecca region in Saudi Arabia from January 2021 to April 2021. Questionnaires were self-administered. The analysis included descriptive analysis in terms of central tendency and dispersion or percentage presentation. Inferential analysis was done using the chi-square test. Results: The sample consisted of 389 respondents from more than five different nationalities. Age and feeling of numbness were statistically related (p<.01). There was no substantial link between the age group of the respondent and self-reported indigestion as an effect of metformin, p=0.205. The reason for taking metformin was not statistically associated with the self-reported mouth ulcers p=0.059. Conclusion: Higher doses, typically lower than 800mg, leads to higher side effects. There were mixed results regarding the duration of medication and the reported side effects, with generally higher incidences of side effects as age increased up to 35 years.

Diabetes Mellitus (DM) is a growing global health concern [1, 2]. The World Health Organization (WHO) has informed that Saudi Arabia ranks the second-highest in the Middle East and is ranked seventh in the world for the percentage of diabetes [3]. It is projected that around 7 million of the population are diabetic, and almost around 3 million have pre-diabetes [4]. Diabetes is a chronic disorder characterized by raised levels of blood glucose, accompanied by troubled metabolism of fats and proteins [5]. Blood glucose upsurges because it cannot be metabolized in the cells due to the deficiency of insulin

production by the pancreas or the incapability of the cells to use the insulin that is being produced effectively [1, 6]. The three most prevalent types of diabetes are Type 1 Diabetes Mellitus (T1DM), Type 2 Diabetes Mellitus (T2DM), and Gestational Diabetes Mellitus (GDM) [7]. Insulin deficit, if left unchecked over the long term, can cause damage to many of the body’s organs. Consequently, leading to disabling and life-threatening health complications such as cardiovascular diseases (CVD), nerve damage (neuropathy), kidney damage (nephropathy), and eye disease (leading to retinopathy, visual loss, and even blindness). However, if appropriate management of diabetes is achieved, these severe complications can be delayed or prevented altogether [8]. Metformin is one of the most widely used oral hypoglycaemic agents [9]. Although the efficacy and safety of metformin for the treatment of type 2 diabetes mellitus (T2DM) have been well established by its long-term clinical use, the administration of this drug is sometimes associated with adverse events. Gastrointestinal adverse events, including diarrhea, anorexia, and dyspepsia, are common during treatment with metformin but are not severe in most cases. On the other hand, lactic acidosis, which infrequently occurs during metformin treatment, sometimes progresses to a serious condition [10, 11].

The main study objective was to assess the self-reported side effects of the prescribed metformin in diabetic patients, to show the metformin complications and to show other uses of Metformin among the study participants.

The study was a cross-sectional study conducted on a selected section of people in the Mecca region in Saudi Arabia from January 2020 to April 2020. selected adult population with type diabetes and who are on metformin living in Mecca regions in Saudi Arabia, and agreed to fill the Questionnaire. The total enumeration method was the sampling approach used to recruit population members into the study. Questionnaires were self-administered and required information about demographic variables and metformin drug intake (cause, dose, and duration), any abnormal changes associated with metformin intake in Saudi Arabia. Approval of the study was requested from the Batterjee Medical Collage prior to the implantation of the study. Confidentiality of the information was assured as no personal identifiers were taken. The data were used for research purposes only, and only researchers who were involved in the research had access. All data were preserved in a secure place within IMC premises, both hard and soft copies. Data were collected using an electronic questionnaire (Google Forms) and cleaned for unwanted responses and missing values. The analysis included descriptive analysis in terms of central tendency and dispersion or percentage presentation. Inferential analysis was carried out using the chi-square test at an alpha level of 0.05. The analysis was carried out by the use of SPSS version 25.

The sample consisted of 389 respondents from more than five different nationalities who were residing in Saudi Arabia at the time of the interview.  As shown in Table (1), the minimum age of the respondents was 20 years, with people aged above 36 consisting of the largest frequency of the age group (41.65%). The highest education level was master's, while 43.2% of the total sample reported having a Bachelor's degree. 72% of the total sample respondents said they used Metformin due to diabetes, while 32.4% said that metformin caused them a low mood of depression. Figure 1 illustrates the dosage of Metformin used among diabetic patients. Figure 2 illustrates the frequency distribution for the duration of use.

In Table 2, age and feeling of numbness were statistically related (p<.01). A higher percentage of the individuals aged between 31 and 35 years said they had feelings of numbness than individuals in the other age groups. Chi-square analysis also showed that Syrians experienced more numbness after using metformin than individuals from other nationalities (58.8%). The least self-reported numbness was experienced by Egyptian nationals in Saudi Arabia at the time of the data collection exercise (31.8%). There was, however, no substantial link between the feeling of numbness and the reason for taking metformin. There was no substantial association between the age group of the respondent and self-reported indigestion as an effect of metformin, p=0.205. However, nationality and self-reported indigestion were significantly associated, where the highest self-reported cases in terms of percentage were Sudanese (See table 3). 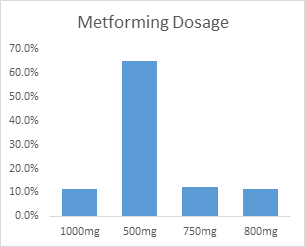 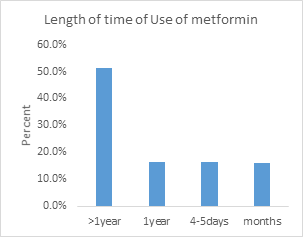 Figure 2: Frequency distribution of the length of time of use

Table 2. Chi-square test for association between numbness and demographic variables

A cross-sectional descriptive design was utilized to provide empirical evidence of self-reported effects of metformin use on respondents of different ages, different nationalities, and the use of metformin for different reasons. The main study objective was to assess the self-reported implications of the use of metformin on diabetic cases, but the study included other uses. By incorporating individuals with different age groups, educational backgrounds, and nationalities, the study aimed at getting as rich primary information as possible hence increasing the validity of the study.

Across the different reported effects of metformin, one could observe from the analysis presented in the study that higher dosages were associated with higher instances of self-reported side effects of the drug. This is clear that higher doses of the drug could imply more side effects of the drug regardless of the reason for using the drug. This finding was consistent with that of Cusi & Defronzo, (1998) [12]. It was also observable from the study that non-Saudis experienced side effects of the metformin more than the other nationalities represented in the sample. While there is no evidence yet to explain this finding, one can only conclude that Saudis are less affected by medicine than people from other nationalities [13].

The study used primary data to make conclusions about the findings of the data. While the advantage is getting firsthand information from study respondents, there were high chances that respondents may have given dishonest answers, a factor that could not be controlled. The sampling method was the less powerful non-probabilistic sampling (convenience sampling), which may reduce the generalizability of the sample findings to a broader population. Seeing mixed results from the sample, such as inconsistencies in the length of use of the medication and the differences in nationalities, ought to be further investigated in future studies.

In conclusion, the results showed that higher doses, typically lower than 800mg leads to higher side effects. There were mixed results on length of use of the medication and the reported side effects, with generally higher incidences of side effects as age increased up to 35 years.

In about one-third of participants, metformin caused them a low mood of depression. Age and feeling of numbness were statistically related, Syrians experienced more numbness after using metformin than individuals from other nationalities. However, nationality and self-reported indigestion were significantly associated. There was also a significant association between dosage and self-reported disturbed vision. Nationality and higher dosage were significantly associated with self-reported mouth ulcers. Therefore, we recommend strict follow up of Metformin users. In addition, we recommend conducting large-scale studies concerning this important topic.