ABSTRACT
Introduction: There is a growing interest in radiating the internal mammary (IM) nodes in the context of adjuvant radiotherapy in breast cancer. There have been variations in defining its CTV and determining acceptable coverage. Clear definitions are necessary; as such, this paper sought to estimate the dose delivered to an institutionally defined IM CTV using the standard modified wide tangential (MWT) fields. Materials and Methods: IM vessels in the first three intercostal spaces of 10 randomly selected patients were contoured. Then, 5 mm was added and trimmed from anatomical boundaries to create the CTV. Three planning target volumes (PTVs) were created (PTV1, PTV2, and PTV3). Plans were created using a 3D technique with the aim of covering the target volumes by 90%–95% of the dose while keeping the V20 of the ipsilateral lung <35% and the V25 of the heart <10%, with a minimum mean heart dose. Two MWT covered the IM lymph nodes and breast or chest wall; one anterior field was used for the supraclavicular lymph nodes. A dose of 50 Gy/25 fractions was prescribed at the isocenter. DVH curves for normal tissues were generated. Results: Six left- and four right-sided patients were included. Nine and one patients underwent mastectomy and lumpectomy, respectively. The mean percentage of the volume that received 95% (V95) ±standard deviation (SD) was: IM vessel (V95) =85.49±14.06; CTV (V95)=78.73±14.30; PTV1 (V95)=65.88±11.99; PTV2 (V95)=76.05±12.31; PTV3 (V95)=70±12.84. The mean heart V25 was 5.5±3.4 for left-sided patients. The mean heart dose was 4.5±1.8 for left-sided patients. The mean ipsilateral lung V20 was 35.15±0.39 and 34.31±1.17 for right- and left-sided patients, respectively. Conclusions: In conclusion, we found that using our CTV volume, covering 80-85% of the CTV by 95-90% of the dose, respectively, is considered acceptable. We should aim for better coverage of our target volumes but proceed with caution to maintain and improve tumor control without exceeding normal tissue toxicity.

Breast cancer is the most common cancer affecting women in Saudi Arabia and around the world. [1-4] A number of studies have shown that adjuvant breast or chest wall and regional nodal radiation improves local control and overall survival, especially in high-risk breast cancer patients. [5-11] As a result, adjuvant radiotherapy has been an integral part in the management of breast cancer.

While these studies included the internal mammary (IM) chain of lymphatics in the target, many radiation oncologists do not routinely include the IM when treating the regional nodes, [12, 13] probably due to a fear of lung and cardiac toxicity and the lack of strong evidence to support this practice. Irradiating the IM has recently become a matter of interest, especially after studies related survival advantage to IM radiation, [9, 14 15] and given improvements in treatment planning techniques that allow radiation to reach the IM without exceeding doses to the lung and heart. [16-19] Including the regional lymph nodes in treatment planning should be carried out with the least possible dose to the organs at risk. The aim of this research is to evaluate the coverage of the IM clinical target volume (CTV) and different planning target volumes (PTV), assuming that modified wide tangential fields are the optimal standard.

The unit of biomedical ethics at our institution approved the study. In order to reduce selection bias, 10 unilateral breast cancer patients were randomly selected with the aim of recruiting a comparable number of right- and left-sided patients. All patients were planned using the modified wide tangent technique, as described in the NCIC CTG MA.20 protocol. [7] The simulation process was done for all patients using computed tomography (CT) scan with slices 2.5–3 mm in thickness. All patients were in the supine position on a breast board with both arms raised above their head. IM vessels in the first three intercostal spaces were contoured following the Radiation Therapy Oncology Group (RTOG) guidelines by three students and reviewed by two radiation oncologists. Subsequently, a 5-mm margin was added for the CTV IM and trimmed from the muscles, bones, lungs, and heart. Another 5-mm margin was added all-around to create PTV1. Afterward, PTV1 was trimmed from the lung and heart to create PTV2 (PTV-eval). PTV3 was a 5-mm margin added to the IM vessels (5 mm around the RTOG contours) (Figure 1). The heart and lungs were contoured using the RTOG consensus guidelines. A plan optimization target volume was created by adding 1 cm around the vessels following the MA 20 protocol for CT-based planning. [7] Apart from the latter volume, the planner was blinded to all other volumes. The prescribed dose for all patients was 50 Gy/25 fractions to the isocenter. Treatment planning was forward using 3–4 fields with the aim of covering the target volume by 90% or 95% of the prescribed dose while minimizing the dose to the heart and lungs to maintain the V20 of the lung below 35% and the V25 of the heart below 10%. Two tangential fields were used to cover the IM lymph nodes, breast or chest wall, and one anterior field, with or without a posterior field for the supraclavicular lymph nodes. Monaco® 5.11 from Elekta, using Monte Carlo treatment planning algorithm was used for planning. Dose–volume histogram (DVH) curves for normal tissues were generated. The information from each treatment plan was used for data analysis.

Adjuvant, locoregional radiotherapy is an integral part of breast cancer management [20]. The extent of surgical resection, particularly in the axilla, and the role of radiotherapy is continuously evolving [21]. The inclusion of the IM chain of lymph nodes has represented an ongoing controversy. On the one hand, most major trials on which we base our recommendations for adjuvant radiation include radiation to the IM. [6, 7, 11] On the other hand, an isolated recurrence rate in the IM is low, [22] and the potential toxicities associated with increasing doses to the heart and lung, which is inevitable with IM radiation, is concerning. [23, 24] Recently, however, there has been a renewed interest in IM radiation, partly due to the emerging evidence that linked it to improvements in disease-free survival. [9, 14] Moreover, advances in radiotherapy techniques, including the use of deep inspiration breath hold (DIBH), have made it possible to treat the IM area with relatively small doses to the heart. [25]

Locoregional breast radiotherapy has largely continued to be field-based. Nonetheless, volumetric planning is essential, particularly with the use of intensity-modulated radiotherapy. As such, developing a standard contouring guideline and coverage criteria is important. The consensus reached by the RTOG group is to contour the IM/thoracic vessels in the first three intercostal spaces, starting at the cranial border of the medial first rib. [26] Using these contours, a standard monoisocentric 2 tangential field, an anterior electron field, and a supraclavicular field, 80% of the target would be covered by 90% of the dose. With contour-based planning, this will go up to 85%. [26] In other words, a conventional, anterior electron-based field does not cover the RTOG-defined contours. Moreover, it is questionable as to whether these contours represent the area at risk of recurrence. Jethwa et al. have found that among 130 IM node metastases, 78% were in the first three intercostal spaces, and of those, 53% were covered by RTOG-defined contours. By adding 4 mm, 5 mm, and 6 mm medial and lateral to the vessels, 90%, 93%, and 95% of the metastatic nodes would have been encompassed, respectively. [27]

The authors also found that 8% and 14% of the recurrences were located cranial to the first rib, but caudal to the confluence of the IM vessels and the brachiocephalic vessels, and caudal to the third intercostal space, respectively. The ESTRO group began contouring the IM CTV 5 mm from the subclavian vein and down to the cranial aspect of the fourth rib. They added 5 mm medial and lateral to the vessels. [28] Further, the Danish group also contoured 5 mm around the vessels but included the four first intercostal spaces. [29] Dijkima et al., from the Netherlands, increased the contours to reach the jugulosubclavian junction. [30] To our knowledge, it is not clear what percentage of those contours are covered with a modified wide tangent technique.

The CTV contours described in the methods section of this study adopted the approach agreed upon by the involved radiation oncologist after reviewing all the above evidence. The addition of a PTV margin was thought to be crucial in the era of conformal radiotherapy. We chose to use different PTVs to account for variations in the PTV margins among different institutions and radiation oncologists.

Our results confirmed that the standard modified wide tangential technique does not adequately cover our target volumes. The RTOG target V95 and V90 was covered by 85.5% and 91.8%, respectively, which was comparable to the contour-based V90 of 85% achieved by Fontanilla et al. [26] Our CTV was covered by 78.7%. It is reasonable to assume that if contour-based planning was used, the results would have been better. In fact, in real life, we do follow contour-based planning to allow for better target coverage and maintain organ-at-risk (OAR) constraints. To cover our PTV volumes, advanced treatment techniques with IMRT and DIBH would have to be used, particularly in the setting of positive IM lymph nodes, where one would consider extending the coverage to include the space cranial and caudal to the first and fourth rib, respectively. Assuming the modified wide tangential technique is the standard approach for elective IM radiation, one would accept 85% coverage to the vessels and 80% to our CTV; however, one should aim for better coverage with advanced techniques, particularly in the context of positive IM nodes.

In conclusion, we found that using our CTV volume, covering 80-85% of the CTV by 95-90% of the dose, respectively, is considered acceptable. We should aim for better coverage of our target volumes but proceed with caution to maintain and improve tumor control without exceeding normal tissue toxicity.

No conflict of interest to be disclosed by any of the authors.

No funding sources associated with this research. 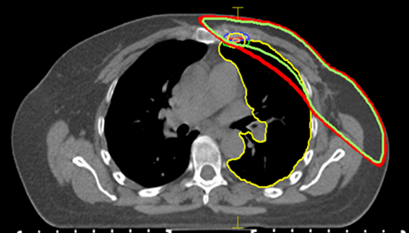