ABSTRACT
Context:‎ Aims: This study was aimed to assess the prevalence of C-shaped root canals in maxillary molars ‎by analyzing cone-beam computed tomography (CBCT) in Iranian population.‎ Settings and Design:‎ Material and Methods:‎ In this descriptive cross-sectional study, 450 extracted maxillary molars were examined by ‎CBCT (NewTom FP QR-DVT 9000 Verona, Italy) radiography. The images were analyzed using ‎NewToms’ NNT software and examined by an oral and maxillofacial radiologist and an endodontist to ‎determine the absence or presence as well as classification of C-shaped canals. Statistical analysis ‎was done by SPSS version 21.0.‎ Results:‎ Of the 450 teeth studies, 24 (5.33%) had C-shaped canals and 426 (94.66%) had normal anatomy. ‎Moreover, the highest type, observed among the study population, was type B1 (Based on Martin ‎classification).‎ Conclusions:‎ The result of this investigation demonstrated that 5.3% of the Iranian population teeth have C-‎shaped morphology‎‎‎.
Key Words: C-shaped canal, Maxillary molar, Cone beam tomography.

Accurate cleaning, shaping, and complete filling of the root canal system are the main goals of endodontic therapy [1], which often become complicated due to variations of root canal morphology, especially when the clinician is unfamiliar with these variations, resulting in treatment failure [2]. The pretreatment identification of the morphology of C-shaped canals can facilitate the treatment and prevent irreparable damages to the teeth [3].

Familiarity with anatomical variations and specific characteristics of teeth in different ethnic groups can extremely be helpful by specifying the position of dental canals, which in turn, leads to a successful treatment [4].

This study used CBCT because this technique has overcome the conventional radiography limitations through creating three-dimensional images; thus, CBCT is important for the diagnosis of the root canal system morphology, especially in teeth with complex root canal morphology [26].

The research protocol of this investigation was approved by the Ethics Committee of Zahedan University of Medical Sciences.

The inclusion criteria were:

No teeth with immature root

No teeth with resorbted canal

No teeth with severe calcification

No teeth with previous endodontic therapy or pulpotomy

A total of 450 extracted maxillary molars, that met the inclusion criteria, were used. The teeth were washed by tap water after extraction and kept in distilled water with thymol iodide crystals until completing the collection. The collection process was conducted by a team of practitioners who understood the aims of the study. After that, the samples were completely washed by tap water and immersed in a sodium hypochlorite solution (5.25%) for 1 hour for disinfecting and removing soft tissues. Then, a scaler was used to remove the calculus and the hard tissue remains on the root surface. The prepared teeth were kept in 10% formalin until used.

All teeth were scanned with a CBCT scanner (NewTom FP QR-DVT 9000 Verona, Italy) with a thickness of 0.3 mm, 90 kV, and an exposure time of 9 seconds. The tomography sections were displayed in the sagittal, coronal, and axial views, using NewToms’ NNT software. Finally, the images were analyzed by a maxillofacial radiologist and an endodontist according to the agreed definitions for C-shaped canals under the same conditions in terms of space, light, and computer systems. Martin classification [27] was used (Fig 1) in this study. Inter-rater agreement among the radiologist and endodontist evaluators was measured. The intra-rater agreement was analyzed by having the evaluation of one-half of the CBCT images by the radiologist and endodontist in each of the 2 sessions.

Figure 1: The maxillary C-shaped molar Classification based on the fused root canal position

The obtained data were analyzed by SPSS (V. 21.0) for the relative frequency and distribution frequency of data using descriptive statistics, tables, and diagrams.

450 extracted maxillary molars were studied using CBCT for the presence of C-shaped canal morphology. Both of the examiners were consistent in their findings (100% intra-rater and inter-rater agreement). 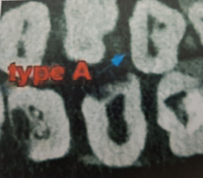 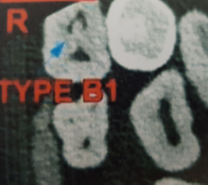 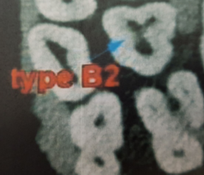 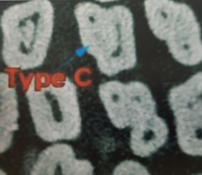 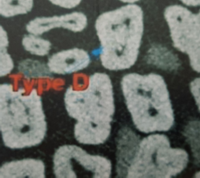 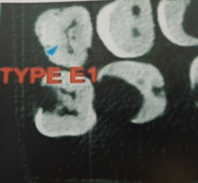 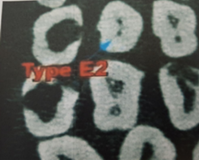 The present study was conducted to assess the prevalence of C-shaped canals in maxillary molars in Iranian population by using CBCT and the Martin classification [27]. A total of 450 extracted maxillary molars were analyzed through CBCT, out of which 24 teeth (5.33%) had a C-shaped canal, that D (4.6%) and B1 (25%) had the minimum and maximum frequencies, respectively. In this study, type A was seen in 16.6% of the C-shaped teeth. Type A maxillary molar is characterized by a fusion between palatal and mesiobuccal canals through a deep and large isthmus. Since this isthmus is a suitable place for the accumulation of microorganisms, it can result in endodontic failure if not addressed during the treatment. In type B, buccal canals are mainly stretched from the coronal and medial sections with a semicircular shape towards the oval and circular canal system at the apical end. Types C, D, and E are probably the most challenging types of C-shaped canal in maxillary molars [27].

Various studies have investigated the frequency and prevalence of C-shaped root canal morphology, mostly in the mandibular second molar [8, 12-14], but no study has been done on this subject in Iran. [2]

The C-shaped canal prevalence was 5.3% in this study and 2.6% in Martin’s study [27] indicating the inconsistency of these studies. We can conclude that the prevalence of C-shaped canals in the maxillary molars is higher in the Central Asian population than the Western European population. This difference can be because of the differences in race, study methodology, and sample size.

Jo et al. [1] investigated the C-shaped canal and root fusion in the maxillary molars of a Korean population through CBCT. Their criterion for the root fusion was based on the Ross classification. They examined 3,553 teeth and reported 63 teeth (1.8%) with C-shaped canal, which was lower than our study. This difference was probably due to the differences in race, methodology, the criterion for C-shaped canal definition, and CBCT software. In the study of Jo HH, type 1, subtype C (MB-DB) was more frequent (n=44, 1.2%), which is similar to our study.

Yang et al. reported a prevalence of 4.9% for the C-shaped canal in maxillary second molar in a Chinese population by using the clearing method [8], which is close to our study [22]. Shalabi et al. [30] found that one out of 83 maxillary first molars in an Irish population had a fusion between the palatal and distobuccal roots, but they provided no additional description about the shape and position of the given canal.

In 2002, De Moor et al. [28] published their 10-year study on 2,175 maxillary first molars through radiographic evaluation in Belgium and reported the prevalence of 0.091% for C-shaped morphology. Their results were inconsistent with ours, which can be due to the differences in race, sample size, and methodology.

Various investigations have proved that C-shaped canals can be diagnosed before the treatment through intra-oral radiography. However, some studies showed that C-shaped canals cannot be easily detected through this method [18]. Therefore, a 3D examination is useful for precise comprehension of the complex anatomical morphology, such as C-shaped canals. Tachibana and Matsumoto [31] used CT for endodontic treatment for the first time. As an obvious advantage, CT allows 3D reconstruction of the root canal system. Recently, CBCT has been commonly used due to lower radiation doses than conventional CT. In fact, CBCT is useful for pretreatment diagnostic evaluation.

The present study showed that 5.3% of maxillary molars have C-shaped morphology in the Iranian population and CBCT is a suitable and more accurate method for the more accurate evaluation of the root and canal variations.