Cancer is a group of more than two hundreds neoplastic diseases [1], considered as a major cause of death worldwide irrespective of human population development, and is characterized by uncontrolled cellular proliferation or growth and the probability to spread of abnormal cells to other parts of the body [2]. Spearing abnormity cells led to death [3].

Cancer mainly is variations occurred in DNA sequence for a normal cell. Breast cancer, in particular, developed from mutation genes [5]. This mutation is influenced by exposure to radiation, hazardous chemicals or genetic factors [6].

Breast cancers that progress in the breast tissue are carcinomas that start in epithelial cells existing in the mammary gland due to the mutation of some genes. Breast tumors (10–15%) are hereditary. Other etiological factors that contribute to elevating the frequency of breast cancer are food contamination, high exposure to radiations, chemicals, physical inactivity, late gestation (after 30 years of age), oral contraceptives, hormone therapy after menopause, and high intake of alcohol and tobacco [11].

Mammary gland tumors had progesterone receptors as PR-positive (or PR+) tumors, and which have estrogen receptors (ER) were generally termed ER-positive (or ER+) tumors and those which have growth-promoting protein termed HER2/neu are identified as HER2-positive [12].

Several anticancer materials are naturally formed by an extensive collection of different organisms such as microorganisms, animals, and plants.

Natural products serve as a good and inexpensive source for novel drug entities [13, 14] and have confirmed to be the most consistent solitary origin of novel and effective antitumor substances [15-18] and have an influence on cellular signaling and gene expression [19].

Natural photochemical diversity was used as treatments for many illnesses comprising cancer [18, 20-23]. Natural physiochemical was establishing as efficient methods for many tumor types and also induce effectiveness via alternations to tumor commencement, development, and progression, in addition to interrupting several mechanisms [24-26]. Several growth factors and its receptors, anti-apoptotic, tumor suppressors and transcription were altered in tumors and could be used as therapeutical factors [27, 28].

Natural products 5-Flourouracil (5-FU) is one of the greatest chemotherapeutic substances used for the treatment of a great variety of tumors [32]. Due to its structure, which is similar to the pyrimidine molecules of DNA and RNA, 5-FU interferes with nucleoside metabolism and can be incorporated into RNA and DNA, and led to death [33].

Honey is a useful food substance and has many important components as minute quantities of pigments, flavor and aroma substances, phenolic compounds and minerals [34].

The researchers attributed the biological properties of honey to the small number of phenolic compounds. Phenolic compounds are classified according to the presence of the chemical group into flavonoids, phenolic acids, flavones, flavanones, flavonols, etc.

Greek honey had a weak osteogenic effect in minimal concentration against the MCF-7 cells [39]. Concerning the Egyptian crude honey samples, it carries both the anti-cancer and antimycotic activity against the HTB-26 breast cancer cell line. Ziziphus honey played a major role in suppressing cell proliferation Mervat and El-Gendy, [40].

At in vivo conditions, the growth of cancer cells was destructed by TH treatment and the pre-clinical study determines that varied actions on DMBA-induced breast cancers were employed by TH [44]. Suppressing breast cancer developing when orally taken (2 g/kg) [45].

Cell lines subculture was performed as described by [48]. The cell monolayer was trypsinized by trypsin/EDTA solution, the excess amount of trypsin was decanted and the flask kept in an incubator for 1-5 minutes at 37 oC. The cells were examined using an inverted microscope to ensure that all cells are detached and rounded. The cells were resuspended in a small volume of fresh growth medium to inactivate the trypsin biodegradable activity. One hundred μl of cell suspension was taken to perform a cell count.

Survived cells were evaluated using SRB assay according to [49]. Cytotoxicity of 5-FU combinations was tested against MCF-7 cells by sulforhodamine B (SRB) assay. cells were collected using 0.25% Trypsin-EDTA and seeded in 96-well plates at 1000–2000 cells/well.

Treatment of MCF-7 cell lines with 5-FU and bee products:

The monolayer cells were trypsinized and re-suspended in growth media (90 % media + 10 % FBS). An equal number of cells were seeded in 6 well tissue culture plate incubating (37oC /24 hrs). The spent medium was removed 24 hours post culture and fresh medium containing IC50 value of honey products and 5-FU in solely and in combination were added to each well.

The dose-response curves of drugs under investigation were analyzed using Emax model in the following formula:

The nature of drug interaction is to defend as synergism if CI1.2; and additive if CI ranges from 0.8–1.2.

Table (1), showing The chemo modulatory effect of (Royal jelly, honey, bee pollen and combination of them) on the cytotoxicity of 5-FU in MCF-7 breast cancer cell lines and honey products (Fig.1 A, B, C, D, E, F, G, H, R). Following overnight incubation, MCF-7breast cancer cells were then treated with either (A)5-FU (control positive group), (B)Royall Jelly, (C)Honey, (D)Pollen grains bee, (E)combinations of bee products and (F-R)treated with 5-FU with a single treatment of RJ, H or PG or their combinations, respectively. The percentage of viable cells was calculated in triplicate (presented as mean±SD, n=3). After 72 hours, a SRB-assay was performed. Cells were exposed to serial dilution of 5-FU, bee products or their combination for 72h.

The chemo modulatory effect of (honey, royal jelly, bee pollen and mix of them) on the cytotoxicity of 5-FU onMCF-7 breast cancer cell lines are shown in figure 1(A-R). Cells were exposed to serial dilution of 5-FU, bee products or their combination for 72h.

Table 1.Combination analysis for the cytotoxicity of 5-FU and bee products against MCF-7 breast cancer cell lines. Data is presented as IC50; n = 3. 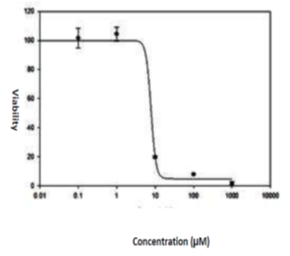 A) Viability of MCF-7breast cancer cells after incubation for 72hr in different concentrations of 5-flurouraciI (5-FU +ve sample). 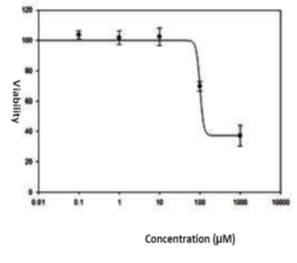 B) Viability of MCF-7 breast cancer cells after incubation for 72hr in different concentrations of Royal jelly. 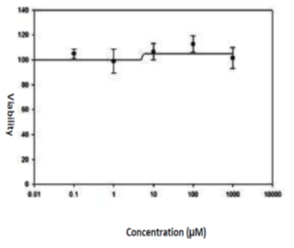 C) Viability of MCF-7breast cancer cells after incubation for 72hr in different concentrations of Honey. 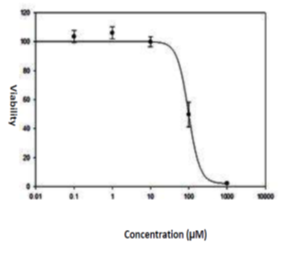 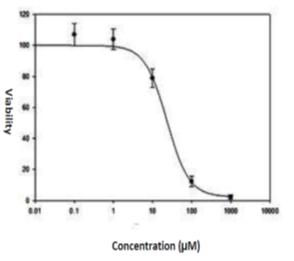 E) Viability of MCF-7breast cancer cells after incubation for 72hr in different concentrations of combinations of Royal jelly, Honey and pollen grains bee. 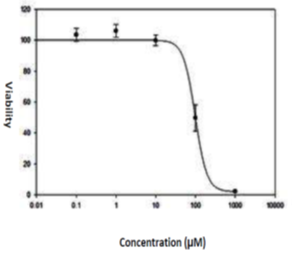 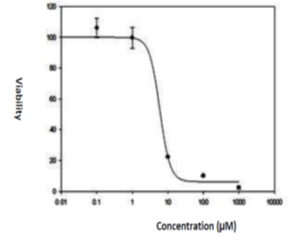 G) Viability of MCF-7breast cancer cells after incubation for 72hr in different concentrations of 5-FU and Honey. 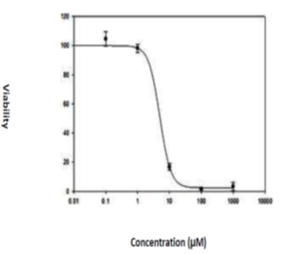 R) Viability of MCF-7breast cancer cells after incubation for 72hr in different concentrations of 5-FU and combinations of Royal Jelly, Honey and pollen grains bee

Figure 1. The chemo modulatory effect of (honey, royal jelly, bee pollen and mix of them) on the cytotoxicity of 5-FUin HTC-116 (A, B, C, D, E, F, G, H, R) breast cancer cell lines. Cells were exposed to serial dilution of 5-FU, bee products or their combination for 72h.

Effects of Royal jelly, Honey and pollen grains bee with /or without 5-FU on MCF-7 breast cancer cells viability in vitro:

Figure 1B -1D showed effective growth-inhibitory impacts of Royal jelly (B), Honey (C) and Pollen grains bee (D)honey on MCF-7 breast cancer cells in a dose-dependent manner. A single treatment with one of the following honey products (H; RJ; PG and their mixes) were exhibited a gradual decrease in cell viability as the concentration of honey was increased reaching an IC50 of >100uM/ml (R value=5.24%); RJ IC50 was >100uM/ml(R=3.71%); Bee Pollen grains, IC50 reached 98.09uM/ml (R=2.13%); whereas, combinations of (H+RJ+PG) IC50, was averaged 6.23uM/ml (R=5.91%). In contrast, supplementation with Bee products (RJ, H, PG) or their combinations with 5FU, showed a much steeper decline with regards to its anti-proliferative ability against MCF-7 breast cancer cells reaching an IC50of 7.65; 4.95; 23.45 and 4.26uM/ml, respectively. in comparison with 5-FU alone (7.79uM). This indicates that any of the bee products alone or combined are much more potent in inhibiting the growth of MCF-7 breast cancer cells in comparison with control samples, where it was averaged >100; >100; 98.09 and 6.23uM/ml corresponding to H; RJ; PG and their combinations, respectively.

Several medicinal plants are used for the treatment of various diseases comprising tumors that are becoming critical for drug discovery and clinical application and research [18, 20-22]. These natural phytochemicals are established to be efficient toward various kinds of tumors particularly breast. In this time, despite the recent introduced techniques and advancement in the methods of diagnosis and therapies for controlling of breast cancer, yet is still one of the main etiology of elevating the morbidity and mortality rates among patients suffering from cancers, while the available therapies are not sufficient to manage breast cancer metastasis.

Natural products 5-Flourouracil (5-FU) is one of the greatest chemotherapeutic substances used for the treatment of a great variety of tumors [31].

Many works of literature established that the combination of more than one treatment is better than a single drug, particularly mix from chemical and natural products. In the current study, the effects of different bee products (with and without 5-FU) on MCF-7 breast cancer cell lines have been evaluated in vitro. The results revealed that supplementation with Honey plus 5-Fu, inhibited the vitality of MCF-7 breast cancer cell lines in vitro, where IC50 reached 7.65 uM/ml vs. 7.79uM/ml with 5-FU alone, also, Royal jelly plus 5-FU, inhibited significantly the growth of MCF-7 breast cancer cells, where IC50 was reached 4.95uM vs. 5-FU alone (IC50=7.79uM). Also, supplementation with PG and combinations of bee products (H+RJ+PG) were significantly inhibited the growth or viability of MCF-7 breast cancer cell lines in vitro with values equal to 23.45 and 4.26uM/ml, respectively. Many authors dealing with the influence of Gelam honey (one of the bee products) as a chemoprotective agent due to its contents of phenolic compounds which are rich with anti-oxidants, in addition to their potent action against carcinogenic cells [41, 50]. Honey products were applied in ancient medicine to treat various disorders and illnesses and possess anticancer, antimetastatic antiproliferative effects [36-38]. In the current study, the suppressing effect of honey products on MCF-7 breast cancer cell lines particularly, honey, PG and their combinations when given with 5-FU was in coordinated with many investigators, where Anna et al. [39] reported the greek honey to have a weak osteogenic effect against MCF-7 cells. In another study, carried by Mervat and El-Gendy, [40] showed that crude Ziziphus honey has important roles for suppressing and proliferation cells. Moreover, Tualang honey increases mitochondrial-dependent apoptosis induced [42, 43]. Also, some authors agree with our finding, they reported that honey significantly suppressed breast cancer cell growth when orally taken (2 g/kg) and control of metastasis of cancer [45]. We can conclude from the current study that honey products represented in hone, Royal jelly, and bee grain pollen can be used to enhance the cytotoxicity of 5-Furacil and consequently reduce the toxicity of 5-furacil for overcoming the breast cancer and their metastasis and their actions may be due to the phytochemical constituents in the honey, particularly phenolic compounds [39, 46].